Where Something Else Happens: Visual “karama” and Contemporary Syrian Documentary Cinema

Editor’s Note: This is a guest blog post written by Nathalie Khankan, lecturer at Dept. of Near Eastern Studies at UC Berkeley.

During the month of March 2017, The Arab Film Festival in partnership with The Center for Middle Eastern Studies (CMES) at UC Berkeley will screen a series of documentaries about Syria by Syrian filmmakers curated by Nathalie Khankan. The series is part of To Aleppo Gone, a semester-long engagement with Syrian art and artists today organized by Julia Choucair Vizoso, CMES Vice-Chair, and Ass. Prof. Ahmad Diab, Dept. of Near Eastern Studies.

The camera moves slowly and carefully across the tapestry of faces of young school children in a Syrian rural village classroom. “We, the vanguards of light,” they chant, “salute our leader Bashar.” They chant and clap. A singular picture of the president sits on the back wall behind them. “We are the voice of the proletariat. We come from the depths of the earth. In sacrifice we eat little. Generosity is our way.” In his 2003 documentary A Flood in Baath Country,  Omar Amiralay returns to the topic of his first short film from 1970 on the damming of the Euphrates River. Back then Amiralay was impressed with the modernization projects of the early Baathist state. 30 years later he creates an impossible-to-forget corrective, an incisive indictment of Baathist ideology and policy. In the barren classroom, the children recite their nationalist slogans again and again. There is no commentary or voice-over. In his signature style, Amiralay’s camera is patient, frames are carefully composed, the view is quietly panoramic.

A powerful dissident filmmaker, and widely considered a pioneer of Arab non-fiction cinema, Amiralay’s work has not been screened publicly in Syria. He passed away in February 2011, a few weeks before the beginning of the Syrian uprising that he had been calling for with fellow artists. 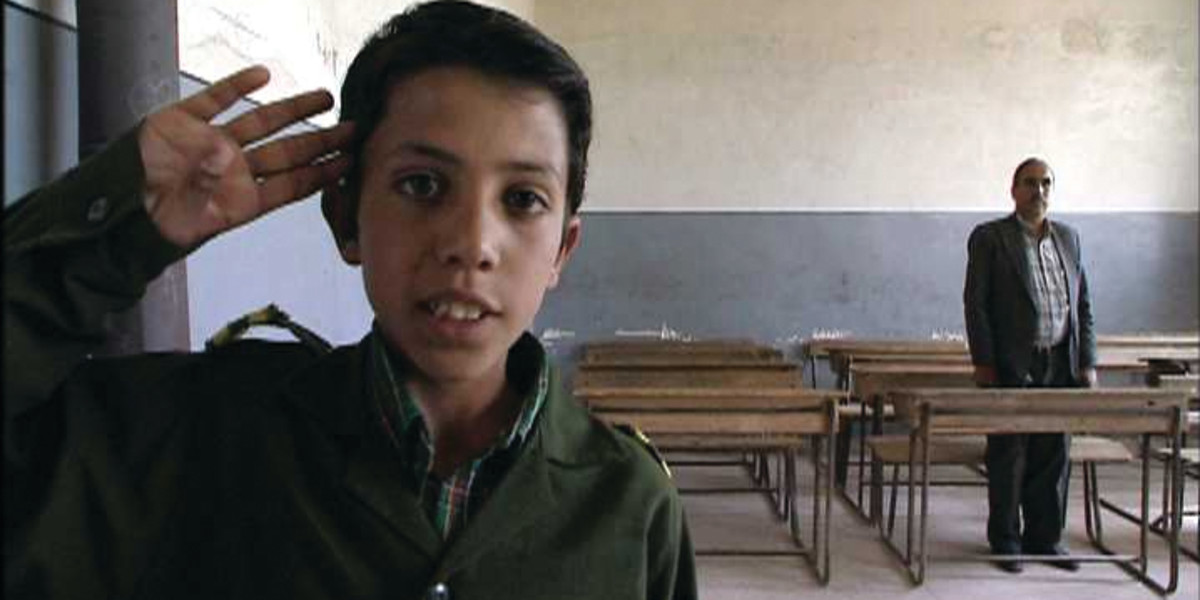 Still from A Flood in Ba’ath Country

Syrian stories from the inside

Since the beginning of the uprisings in Egypt, Bahrain, Yemen, Tunisia and elsewhere in the Arab world, there has been a wave of new filmmaking. With the introduction of digital technologies, bearing witness and disseminating stories were suddenly accessible to activists and ordinary citizens. In Syria, where film production has been tightly controlled by the National Film Organization since 1969, this democratization of production and distribution resulted in an unprecedented outburst of creative energy. Yet, the stakes of documentary filmmakers working inside Syria trying to evade the prohibitions of the suspicious state remain high.

Another important issue for Syrian documentary film-makers concerns representation and the proliferation of violent images. Mainstream war-reportage from Syria is hyper-saturated with torturing or tortured, lifeless or screaming bodies. As a result, no matter how atrocious, violence has been normalized, calamity banalized. The revolution turned civil war is televised globally only intermittently and through a sensationalist lens that rarely looks beyond the violence. To expand the lens, established and emerging Syrian documentary filmmakers are seeking to restore what is erased in mainstream image production. In their work they seek to recover a more textured and dignified representation of Syrian bodies and lives in their complexity. They raise the vital questions of the right to the image and responsibility in representation. In a state of war and emergency, how do you avoid reducing a people to a collection of images depicting gratuitous violence? How do you represent the social and human dimensions of a people in war with deliberation and nuance? 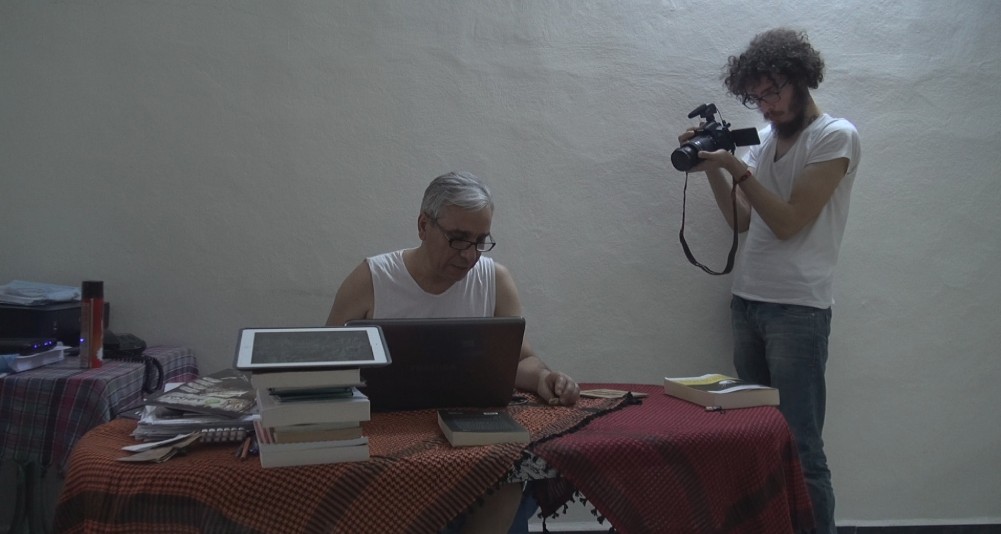 Still from In Our Terrible Country

The call for visual “karama“

Inside Syria the conversation about the right to the image and to karama (dignity) in representation echoes the country-wide chants of “karama, karama, karama” by the Syrian people who took to the streets in 2011. The call for visual “karama” has been spearheaded by the anonymous film collective Abounaddara, but Syrian filmmakers operating at some distance from the rubble, in exile, also participate feverishly in the conversation. Two such important contributions belong to Ali Atassi and Ziad Homsi’s 2014 Our Terrible Country, and Avo Kaprealian’s 2016 Houses Without Doors.

In Our Terrible Country we follow leftist dissident writer and public intellectual Yassin al-Hajj Saleh as he makes his escape north into exile, from his hide-out in Douma to his old hometown and now ISIS-held Raqqa to Istanbul. The story of one man’s perilous journey is also the story of a revolution, once full of hope, and the devastating effects of war.

Atassi and Homsi’s film is a searing portrait of a public intellectual. It asks difficult questions about the role of intellectuals, authorship, and film art in war time and delivers little in the way of resolution. Our Terrible Country belongs to so-called emergency cinema, invoked both by Atassi’s shaky camera work and by the film’s insistence on the intimate, raw and ultimately incomplete representation of its protagonists.

Houses Without Doors, too, is emergency cinema, unsteady, through a broken lens. Here, however, it is more than the image that falters. Linear, progressive narrative, too, falls apart, and gives way to insistent repetition and cyclical time.

Kaprealian’s poetic portrait of his Armenian family’s shifting daily movements in war-torn Aleppo interweaves recordings of family and street life with excerpts from classic films and old documentary footage. By doing so it forges the painful connections between the Armenian genocide and the current war and mass displacement of millions of Syrians from their home cities.

To watch Houses Without Doors is to long to escape the grasp of the claustrophobic interior space of Kaprealian’s world—most of the film is shot from inside the living room of the director’s family’s home, looking out onto the street from the window or into the faces of family members inside the living room. Yet once departure happens and the family vacates the home, the rupture feels unbearable. If we could only stay a bit longer within the slow unfolding of things happening here, an arm’s reach away from violence but elsewhere from it, inside the living room, inside the home, in the intervals between bombs.

Together, Amiralay, Atassi, and Kaprealian convey moving and resonant stories from the inside. Each of them offers an epic map of fracturing Syrian worlds. Each of them work, in different ways, to tell a story happening elsewhere through the mouths and eyes of school children and village leaders, intellectuals and activists, mothers and sisters.

This series highlights films about Syria by Syrian filmmakers. It highlights not only their talent, but also the breadth and range of their aesthetic sensibilities. 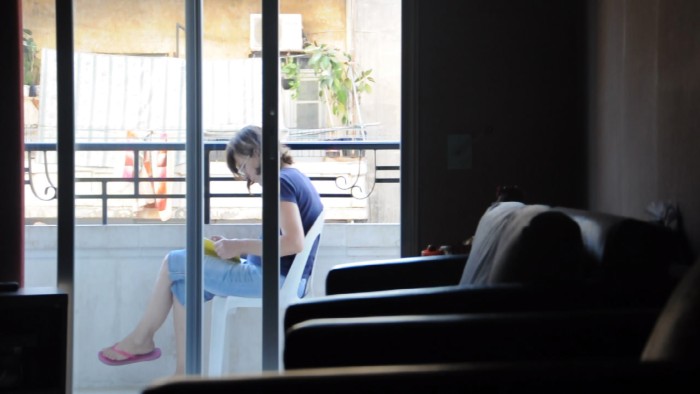 Still from Houses Without Doors