As the 2019 Arab Film Festival nears, we cannot wait for opening night on October 11th where we will be showing It Must Be Heaven, the newest film from the incredibly talented Palestinian director and actor Elia Suleiman – get your tickets here. In preparation, we’re taking a look at the life and career of the man behind the camera.

Film still from It Must be Heaven, featuring the director Elia Suleiman

Elia Suleiman was born in 1960 in Nazareth, Palestine. For nearly a decade beginning in the early 80’s, he lived to New York City where he began making films. In 1990 he co-directed his first short film with Lebanese-Canadian artist Jayce Salloum. The film, entitled Introduction to the End of an Argument, is an experimental documentary that utilizes found footage sources from Western and Israeli films, documentaries and new coverage as well as excerpts of footage shot in the West Bank and Gaza. The film critiques the representation of the Middle East, Arab culture and Palestinian people, as produced by Western media. The entire 41 minute film is available to watch, for free, on Vimeo. 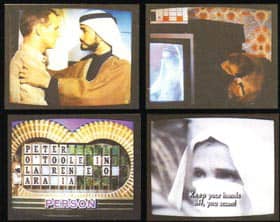 Film still from Introduction to the End of an Argument

During his time in the United States, Elia Suleiman also directed the short film Homage by Assassination (1992).  This “diary film” is about Elia, writing a script in his New York City apartment during the Gulf War. While he paces and attempts to shut the world out and focus, images of past wars in the Middle East keep coming up in his mind. This film, his first solo work, begins Elia’s personal tradition of acting in his own films.  You can watch the entire short on YouTube. 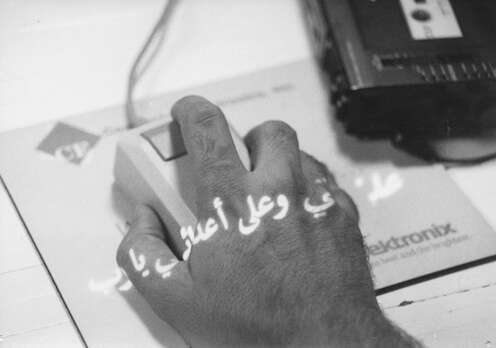 Film still from Homage by Assassination

In 1994, Elia Suleiman decided to move back to Palestine. He took a position as a professor at Birzeit University, where he was also tasked by the European Commission to create a Film and Media department. In 1996 he directed his first feature film, Chronicle of a Disappearance. In the film, Elia plays himself returning to Israel and the West bank after a long absence. The film is comprised of a series of vignettes and sketches, a commonly used device in Elia’s films that allows him to capture a larger idea or feeling beyond one specific narrative. Chronicle of a Disappearance showcases the daily life in Nazareth, from the light, humorous paradoxes to more sobering images the portray the restlessness and uncertainness of Palestinian life. The film was critically acclaimed and even won the award for Best First Feature at the Venice Film Festival in 1996, as well as awards from the Seattle International Film Festival and the Festival of Three Continents that same year. The Palestinian Cinema Archive has made the film available to watch in full on YouTube. 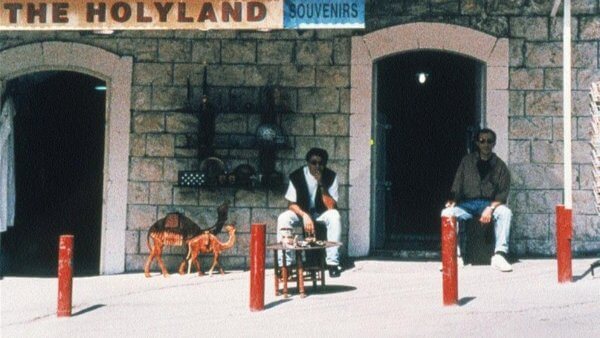 Film still from Chronicle of a Disappearance

In 1997, Elia Suleiman collaborated with Israeli filmmaker and longtime friend Amos Gitai to co-direct a documentary short called War and Peace in Vesoul. Elia and Amos captured their trip to a tiny film festival in Vesoul, France where the festival’s director had invited both filmmakers to appear together with their films as a rather comical gesture in favor of peace in the Middle East. Most of the film takes place on the train to the festival where the two men discuss the similarities and differences between their lives, touching on topics such as war and peace, their respective cities and their lives. The film is described as an “ironic reflection on stereotypes and political correctness”. 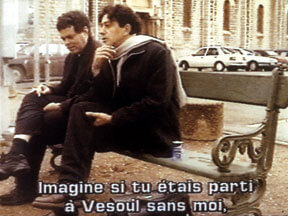 Film still from War and Peace in Vesoul

Elia Suleiman’s next solo film came about in 1998. It was a short film entitled The Arab Dream (Al Hilm Al-‘Arabi). In this autobiographical film, Elia goes in search of his past and possible future in occupied Palestine, exploring the issue of identity. There is one powerful quote from the the film where he tells the audience, “I don’t have a homeland to say I live in exile…I live in postmortem…daily life, daily death.” The film was commissioned by the ARTE network as a part of a series for films for the end of the millennium.

This film was followed by another short in 2000 called Cyber Palestine. In it, a modern day Joseph and Mary are living in Gaza and trying to reach Bethlehem before the turn of the millennium. As with all modern Palestinians, Joseph and Mary run into trouble due to the Israeli occupation. The film was commissioned by the Palestinian National Authority’s Bethlehem 2000 Project. 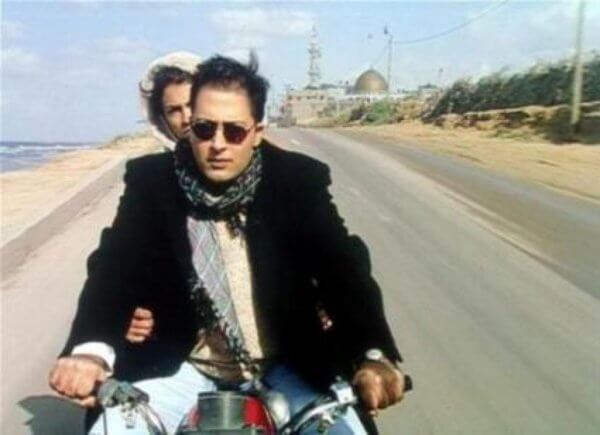 This brings us to Elia Suleiman’s second feature film Divine Intervention: A Chronicle of Love and Pain (2002). A surreal black comedy, this film chronicles life in Palestine but in particular, the story of a man living in Nazareth, whose girlfriend lives in Ramallah, separated by several Israeli checkpoints. The film is, once again, made up of many interconnected vignettes and stars Elia as the boyfriend in Nazareth. The film is known for its minimal use of dialogue and slow pace, all qualities that we continue to see throughout Elia’s work. The film was well received and was nominated for a Palme d’Or award at the 2002 Cannes Film Festival. It was also considered for the 2003 Academy Awards, despite controversy with the submission the year prior as the Academy, at the time, did not consider Palestine a nation and thus unable to submit a film for the Best International Film award. 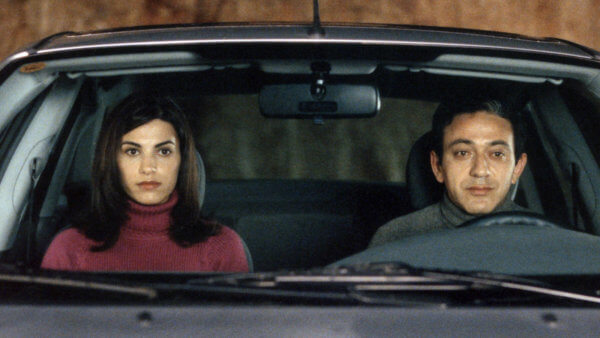 In 2007, Elia went back to short form with the film Awkward (Irtebak). The film is a reflection of what it means to become a celebrated Palestinian director through a dark but humorous account about the reception of the film Divine Intervention and other awkward moments at film festivals. This piece was commissioned by the Cannes Film Festival for a French anthology comedy-drama called To Each His Own Cinema which celebrated the festival’s 60th anniversary. The collection features 34 short films, all 3 minutes long, by 36 acclaimed directors.

Elia’s next feature film was The Time That Remains: Chronicle of a Present Absentee in 2009. It is a semi-autobiographical drama film that is inspired by the writings of his parents. Elia sites his father’s diaries as a resistance fighter during the creation of Israel and his mother’s letters to exiled family as the basis of the story. The film, like many of his others, takes place in a series of fairly quiet vignettes. Most of the film focuses on Elia’s parents, in particular his father Faud, from when Elia is child and as they age. A great line written by A.O. Scott in a 2011 New York Times review of the film sums it up as a “chronicle of mortality and survival, a thorny and intricate film that is also breathtakingly simple and honest.” If you have not seen Elia’s features, I highly recommend reading some of these reviews from publications such as the New York Times and Variety who go much further in depth describing Elia’s unique style of quiet vignettes and dark humor and the depth of what he is able to capture in his stories. The Time That Remains participated in the 2009 Cannes Film Festival as part of the official selection. It also showed at the 2009 Toronto International Film Festival (TIFF) and the Middle Eastern Film Festival in Abu Dhabi and won awards from a number of other institutions including Critics’ Prize from the Argentinean Film Critics Association. If you’re catching up on all of Elia’s films before AFF2019, you can can find The Time That Remains streaming on Hulu and for rent or purchase on additional platforms.

The Time That Remains 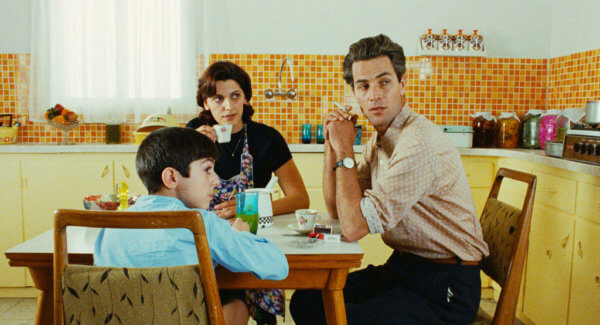 Film still from The Time That Remains

Around this time, in 2008, Elia became a professor once again, this time at the European Graduate School in Saas-Fee, Switzerland. He continues to teach there as a professor of film in the Division of Philosophy, Art & Critical Thought. In 2012, Elia directed another short film entitled Diary of a Beginner that is part of an anthology film called 7 Days in Havana. This film is set during a week in Havana, Cuba. Each day is a new segment directed by a different filmmaker, Thursday being the day directed by Elia. 7 Day in Havana competed in the 2012 Cannes Film Festival as part of the Un Certain Regard selection. 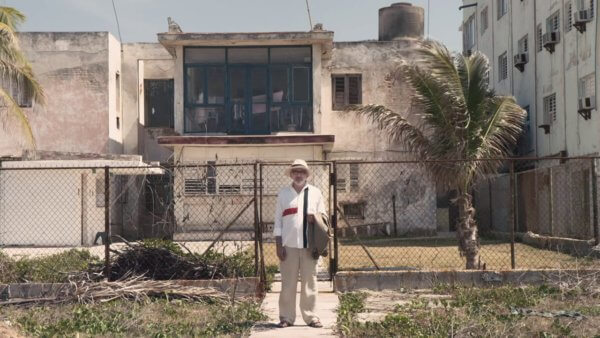 Film still from Diary of a Beginner

Finally, that brings us to Elia’s newest film: It Must Be Heaven (2019). The film premiered at this year’s Cannes film Festival as part of the official selection where it received the Fipresci Critic’s Award. In this film you see all of Elia’s trademark styles. The film is a series of quiet but beautiful vignettes that show a mix of humor and darkness in the world. The film stars Elia, of course, and follows him as he leaves his home in Palestine and travels to Paris and New York. He is looking for someplace new but along the way finds only similarities. The film itself has been making it’s way around the world to many incredible film festivals and has even been chosen as Palestine’s submission to next year’s Academy Awards. Check out the trailer for the film below.

To wrap up Elia’s life story, all we can say is that he currently resides in Paris with his wife, Yasmine Hamdan who is an incredibly talented artist in her own right. We’re not sure what’s in store next for Elia but we know whatever he creates will be awesome and very uniquely his own.

Until then, make sure you don’t miss the incredible It Must Be Heaven at the Opening Night of AFF2019 on October 11th at the historic Castro Theatre in San Francisco. Purchase your tickets here! 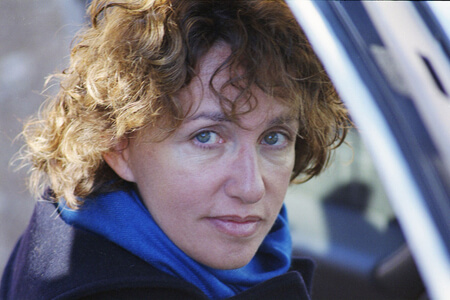 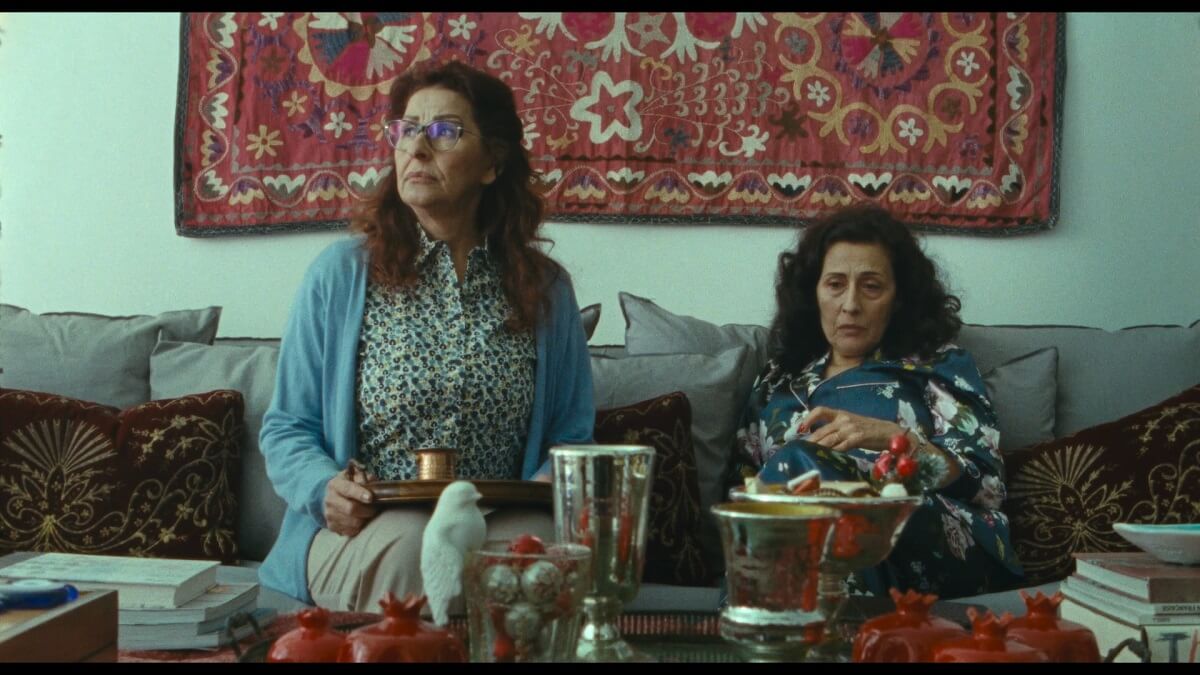