Earlier this year, the Arab Film Festival co-presented a special screening of Amal’s Garden, a half-hour documentary about the story of Mustafa and Amal, an elderly Turkmen couple living in Kirkuk, Iraq trying to move on with life after war. In light of the recent mass displacement of ethnic minorities in northern Iraq, Nadia Shihab tells us about her impetus for the film, the challenges of filming in Iraq, and the plight of ethnic minorities in Iraq’s shifting landscape. 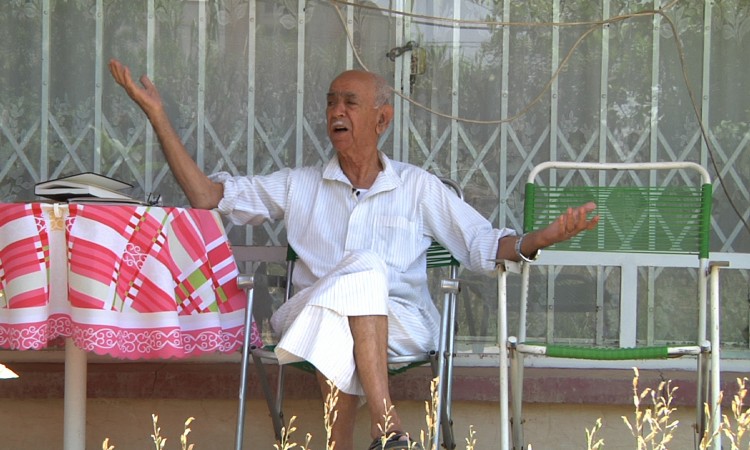 Amal’s Garden follows the story of Amal and Mustafa, an elderly couple from the Turkmen ethnic minority, as they try to move forward in a new Iraq.

What is Amal’s Garden about?

It’s a story about an elderly couple in north Iraq who are trying to regain normalcy in their lives after many decades of war. Amal is a retired cooking show host who cares for her aging husband Mustafa. As she battles persistent power outages and works to renovate their home, Mustafa spends much of his time sitting alone in the garden, singing Turkmen folk songs from his childhood. Amal works to move life forward while we see Mustafa almost slipping into the past. 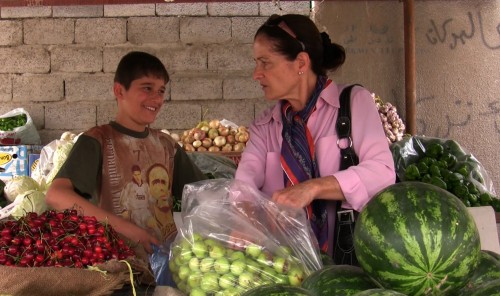 Amal’s Garden documents the lives of Amal and Mustafa, an elderly Turkmen couple living in Iraq. Amal, picture right, talks a young Turkmen boy about learning Turkish instead of Arabic.

How did you meet Amal and Mustafa?

Mustafa is my great uncle, and Amal is his wife. Unlike many of my immediate Iraqi family who left Iraq in the 1990’s as refugees, Amal and Mustafa chose to stay in Iraq despite the war. They love their home and the long-standing Turkmen community they have in Kirkuk.

What made you decide make this particular film about them?

I wanted to tell a story about Iraq that was real and personal, and about the human experience rather than expert analysis. In the last decade, the dominant western narrative of Iraq has been one of sectarian violence and division. If stories don’t fit this paradigm, they often don’t make it into the news. In this case, Amal and Mustafa’s world was an entry point into better understanding the ways that ordinary Iraqis navigate the landscape of war. It’s not about car bombs; it’s about how you’re going to make dinner when there is no power. It’s about music and memory and what happens when the places we love transform. At the same time, the film was also a vehicle to illuminate the position of ethnic minorities in north Iraq.

Amal and Mustafa are from the Turkmen ethnic minority in Iraq. Can you say a little more about that?

The Turkmen (Turkumani) are a Turkish-speaking community that lives in northern Iraq. They are the third largest ethnic group in Iraq, behind Arabs and Kurds, and their strongest presence is in and near the cities of Tel Afar, Kirkuk, and Erbil. Like other non-Arab ethnic minorities in the region (Kurds, Assyrians, Yazidis, Armenians, Jews, etc), Turkmen were historically treated like second-class citizens for many decades by the largely Arab Ba’athist regime. They continue to face challenges as a result of their minority status.

However, while the historic context is important, the story I explore in the film is really a universal one. It ultimately rests on Amal & Mustafa, and their desire to find peace within the unpredictability and chaos that is modern day Iraq.

It is a very intimate film, and it feels worlds apart from the kinds of images the West often sees of Iraq. Was that your intention? 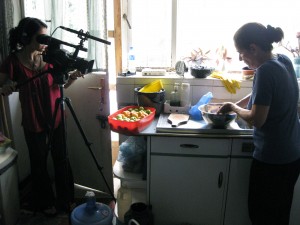 as very much a product of the circumstances of shooting. It was very difficult to film on the streets of Kirkuk. As a young woman with a camera, authorities viewed me with suspicion and wanted to know why I was being led around by an elderly Turkmen woman. They wanted to know what my agenda was. At the same time, running errands outside the home was clearly stressful for Amal and Mustafa because of their age and also because the reminder of war was still everywhere. As a result, we spent a lot of time at home in the garden, which was a very peaceful haven. This naturally created a smaller, more intimate canvas to work with. Patterns emerged, and this repetition became a part of the film’s structure. The renovations of the dilapidated house, the sudden darkness brought on by recurrent power outages, the swinging moods of Mustafa’s health; all of these elements began to take on larger meaning, becoming a symbol of the embattled landscape of Iraq.

The film is called Amal’s Garden, but it almost feels like the film is more about Mustafa. How do you view the importance of Amal’s character?

It’s true that Mustafa and his songs are very much at the center of the film. But behind the scenes, it is actually Amal that creates the serenity around him. She runs the errands, directs the workers, cooks the meals, finds the flashlight when the power goes out, and ultimately, keeps the garden in bloom. Every night after Mustafa had gone to bed, she snuck out into the garden and watered every flower, every plant, so that the garden would be radiant for him in the morning. Her name literally means “hope” in Arabic, so the title “Amal’s Garden” translates to Garden of Hope (“Hadeekat Amal”) in Arabic. In any landscape of war, there are thousands of women like Amal keeping life running smoothly.

Have Amal and Mustafa been impacted by the current instability in the region and the threat of the Islamic State?

Yes, they have temporarily left Kirkuk to stay with their sons outside of the country. It’s very unfortunate. However, they have plans to return and have basically said: “This is our life and what we are used to.” Elsewhere, our Turkmen relatives, mostly farmers, have also fled their homes in the city of Tel Afar.

Our hope is that the film will shed light on the vulnerability of ethnic minorities in the region, challenge stereotypes, and offer a poetic and emotionally-grounded take on the lives of ordinary Iraqis impacted by war.

Finally, what advice do you have for aspiring filmmakers?

I think every artist has to figure out for themselves what conditions they need to create. There is no one right way to do anything. For me, two things are essential: the space to create and the time to do it. I also think its important to find artists whose work resonates with you. I draw inspiration from many directions, from minimalist composers to Japanese fashion to watching the experimentation and development of filmmakers like Elia Suleiman, Laura Poitras, and Agnes Varda. The more you expose yourself to, the further you refine your taste. But what works for me might not work for everyone. When in doubt, seek out a mentor whose work you admire and turn to them for advice when you need it.

Amal’s Garden will be screened at the Spectacle Cinema in Brooklyn on September 21st, with a other screenings to be announced on the website (www.amalsgarden.com) next month. Amal’s Garden is also available for streaming and purchase here.