This is the second of a three-part series of posts on how to watch Arab films streaming now while practicing social distancing.

Since most of us are stuck at home isolating, we at AFMI have chosen 5 Arab films that bring us joy during these difficult times. Comedy, romance, friendship, family and adventure are the main themes present in this movies.

Each film is available to stream online, either for free or with a subscription. 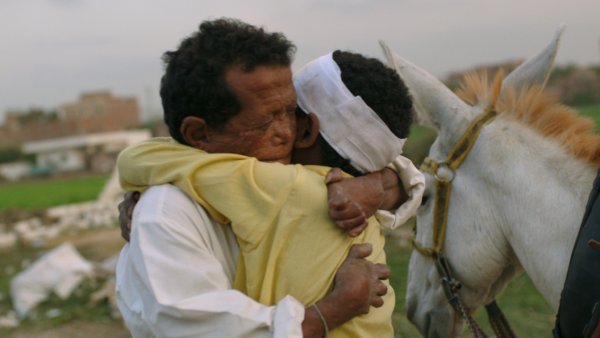 Yomeddine is the story of a widowed, Coptic leper named Beshay and his orphaned apprentice, Obama. They leave the confines of the leper colony for the first time and embark on a journey across Egypt to search for what is left of their families. While the characters see hardships throughout their journey due to bigotry, they also find friendship and kindness and a better understanding of themselves and their own strength. This film was one of my favorites from AFF 2018 and it makes top of my list of narrative Arab films streaming now. It will absolutely warm your heart. Available on Netflix. 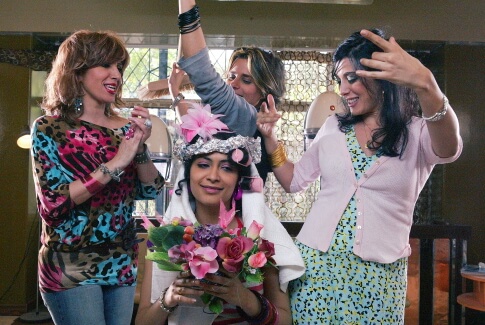 If you’ve followed this blog or a while, you know that we adore the work of Nadine Labaki and this recommendation probably does not come as much of a surprise. Caramel is the story of five friends whose lives cross at a beauty salon in Beirut. Each woman is struggling with a relationship of some sort but always find comfort, love, strength and support in their friendships with each other. I’ve seen it described as “a sweet love letter to Beirut, its women and their idiosyncrasies” which I think is absolutely spot on. The film is warm and colorful and features an incredible soundtrack by Khaled Mouzanar. Available on Tubi TV. 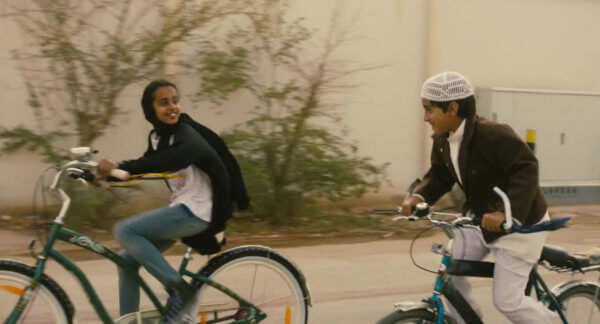 Wadjda is about an enterprising Saudi girl who is determined to buy the green bicycle that has captured her interest, despite being told that she cannot have one because she’s a girl. To raise the funds she needs, she joins a Koran competition and showcases her hard work and determination, even when doubted by the adults around her. This film can be horribly frustrating to watch as we see Wadjda and other girls and women in her life limited by a rigid code of conduct but it also showcases women’s strength and their ability to take charge of their own lives. By the end of the movie, you will have smile on your face. The film is also one of historical significance as it is the first Saudi film directed by a woman. Available on The Criterion Channel. 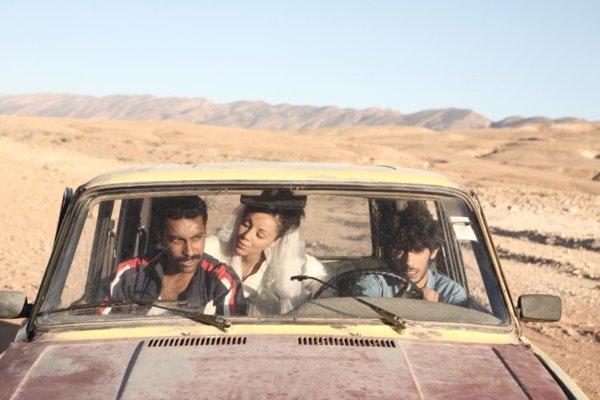 Mounir Mekbek lives with his family in a small village in the heart of the Algerian countryside. Very proud and sure of himself, he has only one dream- to finally be appreciated by his fellow villagers. Screwing up his carefully maintained image is his headstrong, narcoleptic sister Rym who falls asleep anywhere and whom the village is convinced will end up a spinster. One evening, Mounir returns from town drunk and announces that he’s found a suitor for his sister. The fake story snowballs and snowballs until the suitor morphs into a rich, blonde Australian. The village begins preparing for the wedding in earnest – but without a bridegroom in sight. Mascarades is a humorous and charming comedy-of-errors as Mounir digs himself and his family deeper and deeper into his fake story and his desire for attention and appreciation. Available on Tubi TV. 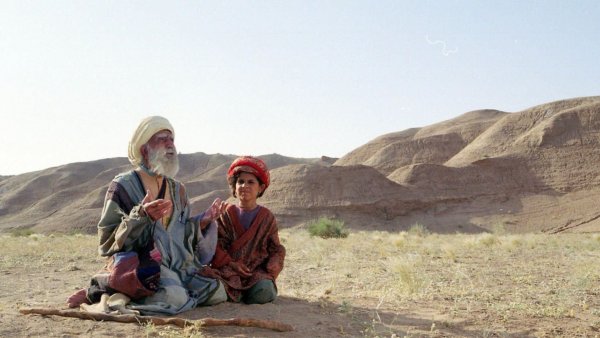 Bab’Aziz: The Prince That Contemplated His Soul (2005) dir. Nacer Khemir

This film tells the story of a blind dervish, Bab’Aziz, and his spirited granddaughter, Ishtar, together they wander the desert in search of a great reunion of dervishes that takes place just once every thirty years. Throughout the film, a series of other tales are told and eventually weave themselves together into the story of Bab’Aziz and Ishtar. The film is one of contemporary folklore that feels akin to a mini Arabian Nights. The movie is exciting and delightful. It’s also very beautiful. Watching it brings up nostalgic feelings of my childhood when I would read Arab folktales and stare for hours at the beautiful outfits and intricate patterns in the buildings of the illustrations. The film has lovely costuming and detailed sets and also features stunning shots of the deserts of Tunisia. One user on Letterboxd described the landscape in a way I loved. They wrote: “Huge, wide open spaces, and sky so big you can fall into it, patterns on the ever-shifting ground that capture the eye, and even death has a certain elegance as the sand rips away flesh, leaving only a poetic frame behind.” This film wraps up our list of narrative Arab films streaming now and is an easy and engaging watch that is appropriate for the whole family. Available on Fandor and Amazon Prime. 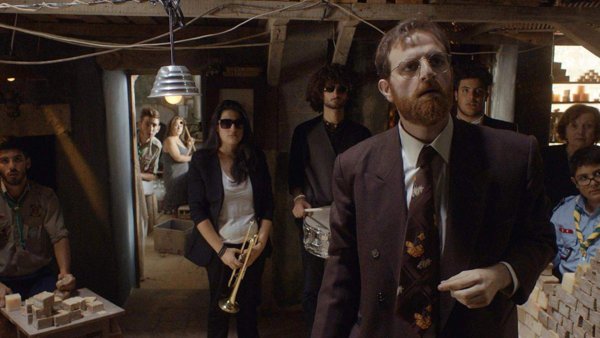 Film still from The President’s Visit

As a bonus, we also gathered a few short films, which you may recognize from past Arab Film Festivals, which are also streaming online:

In the northern mountains of Lebanon, a Syrian man hoping to reunite with family torn apart by war encounters two Palestinian children whose own stories of exile provide a glimpse into the uncertainties he must face as a refugee. Available on Vimeo.

When a small coastal town of fishermen learns about the secret visit of the President of the Republic to its local soap shop, they embark in an everlasting struggle at cleaning up and maintaining the perfect image of their town. Available on Amazon Prime.

The silent routine of 5 Nuns living in the West Bank wilderness is disturbed when an Israeli settler family breaks down right outside the convent just as the Sabbath comes into effect. Oscars Best Live Action Short nominee, 2016. Available on Amazon Prime, Kanopy, Fandor and Vimeo.

Mohamed is deeply shaken and suspicious when his estranged eldest son Malek returns home from Syria to rural Tunisia with a mysterious young wife in tow. The emotional complexities of a family reunion and past wounds lead to tragic consequences. Oscars Best Live Action Short nominee, 2019. Available on YouTube and Vimeo.

When a banker invites a sex worker to his London apartment, he finds himself coming face to face with both his own past, and one of the world’s largest humanitarian crises. Available on YouTube. 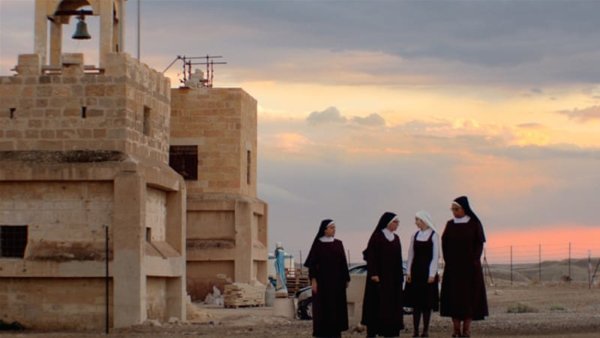 Catch even more Arab short films on Saturday May 2nd and Sunday May 10th during the next two installments of the Arab Films Series Online.

Looking for even more Arab narrative films available to stream online? Check out this list of all the Arab movies we found in our research. We also encourage you to explore beyond this and see what is available to rent or buy (rather than stream) online as well!