We are excited to announce that Sophie Boutros’s MAHBAS – Solitaire will launch 10 days of films at the 21st edition of the Arab Film Festival in San Francisco (October 13-22).

The 21st annual Arab Film Festival will kick off on October 13 at the Castro Theatre with Director Sophie Boutros’s MAHBAS – Solitaire. The Opening Night celebration will feature a pre-screening VIP reception at 6 pm as well as an after party at the Mercer.
MAHBAS – Solitaire is Boutros’s first feature film and has been an audience favorite around the world, with its portrayal of family ties, grief and forgiveness.  The film will have an encore screening at the New Parkway Theatre in Oakland on October 20 and open the Los Angeles edition at the Harmony Gold on October 27. 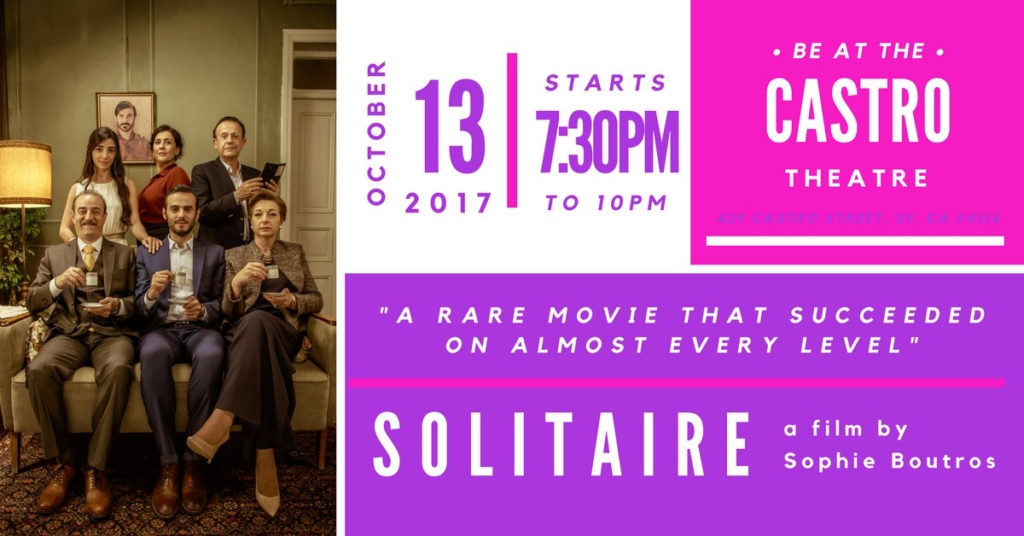 Synopsis: 20 years past the Lebanese-Syrian war, Thérèse cannot get over her brother’s death by a Syrian bomb. Her only daughter is getting engaged, but only when the suitor and his parents are at her doorstep, she discovers they are Syrian.
The cast includes award- winning actor Julia Kassar—who plays Thérèse, and Nadine Khoury and Bassam Koussa, who play the future Syrian in-laws.
“Solitaire tackles some of the most important issues of our times: war, hate, prejudice and forgiveness, all the while entertaining, delighting, and moving us” said AFMI Executive Director, Serge Bakalian.
The Arab Film Festival is North America’s largest and longest running exhibitor of independent Arab films from and about the Arab World. This year’s festival of 50 films representing 28 countries offers a full complement of narrative and documentary features, curated short programs and plenty of both US and Bay Area premieres. In 2017 the Arab Film Festival expanded and is now part of the Arab Film and Media Institute.

GENERAL FESTIVAL INFORMATION
AFF 2017 will take place over 10 days from October 13th through the 25th throughout the San Francisco Bay Area. Films will be screened in San Francisco at the Castro Theatre, and Roxie Theater; in Oakland at The New Parkway; in Vallejo at the Empress Theater and in Berkeley at the Landmark Shattuck Cinemas. An abridged version of the Festival will take place in Los Angeles October 27-30.