Check out the full #AFF2022 schedule and buy tickets here! The Arab Film Festival 2022 runs from November 11 through November 20th. Rita Baghdadi is an Emmy award-winning Moroccan-American documentary filmmaker known for the intimacy of her bold, character-driven films. Rita’s latest feature documentary SIRENS premiered at the 2022 Sundance Film Festival and was awarded the Grand Jury Prize at Outfest. The film was praised as “utterly charming” by the Hollywood Reporter and “deeply moving” by RogerEbert.com. Previous films include MY COUNTRY NO MORE, winner of Best Feature at the Big Sky Documentary Film Festival, and CITY RISING which won the LA-area Emmy award for Best Social Issue Film. Rita’s work has been supported by Sundance, Tribeca, Netflix, HBO, Canon, Film Independent and the International Documentary Association. She is co-founder of Lady & Bird Films and is a member of Brown Girls Doc Mafia. When she’s not in the field, she is an active mentor dedicated to empowering women of color through documentary filmmaking. Mounia Akl is a director and writer from Lebanon living between Beirut and New York. She holds a bachelor’s degree in Architecture from ALBA and an MFA in Directing from Columbia University and is a member of the Academy of Motion Picture Arts and Sciences®. Her first feature film, COSTA, BRAVA LEBANON (Sundance Labs, Cannes Residency), premiered in 2021 at the Venice Film Festival, Toronto International Film Festival (Netpac Award) and BFI London Film Festival (Audience Award) amongst others. It was inspired by her short film SUBMARINE (Official selection at the 69th Cannes Film Festival, TIFF 2016).

Apart from directing, Mounia has also taught a lab in Directing at Columbia University, New York, and directing at the NHSI film summer institute at Northwestern University, Chicago.

Mounia is currently developing new projects (TV and Film) between Paris, Beirut and LA where she also was recently a Ted Talk Women speaker. Natacha Karam is an actress known for embodying physically capable and tenacious characters. She starred as a series regular in the NBC military drama THE BRAVE as elite sniper Jaz Khan. Now, Karam stars as hijabi firefighter Marjan Marwani in the Ryan Murphy hit series 9-1-1: LONE STAR in its fourth season on Fox. Karam also appeared in the feature film THE OLD GAURD with Charlize Theron on Netflix and had an arc in season six of the Emmy Award-winning series HOMELAND on Showtime.

Natacha Karam was born in Saudi Arabia to her mother, Bernadette Devlin, and her father Marc Karam. Karam is of Lebanese and Northern Irish heritage. She spent most of her younger years in Jordan, Jeddah, Bahrain, Dubai, and Ireland. Karam moved to London shortly after turning eighteen to pursue a career in acting and attend art school. She believes that her intersectional cultures and her many ‘homes’ uniquely equip her to bring texture and humanity to the characters she portrays. Shereen is a queer Syrian-American filmmaker, poet, and artist. She’s self-published two poetry collections and her work has been featured at the New York Museum of Modern Art and the European Independent Film Festival. She also co-hosts the podcast Ethnically Ambiguous on iHeartRadio. Suzannah Mirghani is a writer, researcher, and media studies/museum studies graduate. Sudanese-Russian, she is interested in stories about the complexity of identity. Suzannah is the writer, director, and producer of AL-SIT (2020, Sudan/Qatar), screening on Netflix Middle East, and winner of the Canal+ Award at Clermont-Ferrand Short Film Festival in 2021 as well as 6 Academy Award qualifying prizes at Tampere Film Festival; LA Shorts; BronzeLens; New Orleans Film Festival; AFI Fest; and Interfilm Berlin. Her latest short is the experimental documentary/social media satire VIRTUAL VOICE (2021), which premiered at Tribeca Film Festival. Suzannah is working on her first feature COTTON QUEEN, which won the ArteKino Award at L’Atelier de la Cinefondation at the Cannes Film Festival in 2022. Haya B. AlGhanim (HBG) is a screenwriter, director, and producer based between New York City and Kuwait City. Through her artistic and professional practice, AlGhanim aims to preserve and represent modern Arab art and culture.

AlGhanim also produces digital content for new media platforms. Her commercial and marketing experience includes stints at Film at Lincoln Center, Us Weekly, and MATTE Projects. She is currently on the marketing team of leading film distributor Kino Lorber and a review committee member at the Gotham Film & Media Institute (previously IFP).

Haya AlGhanim received her MFA in Film from Columbia University, where she was a Teaching Fellow for the undergraduate Film Studies program. She holds a BA from The New School, where she was also a Teaching Assistant for courses in16mm filmmaking and digital video production. Hazem Fahmy is a writer and critic from Cairo. A PhD student in Middle Eastern Studies at Columbia University, he runs the literary newsletter wust el-balad, on Substack. His debut chapbook, Red//Jild//Prayer won the 2017 Diode Editions Contest, and his second, Waiting for Frank Ocean in Cairo was published in 2022 by Half-Mystic Press. A Kundiman and Watering Hole Fellow, his writing has appeared, or is forthcoming in The Best American Poetry 2020, The Boston Review, Prairie Schooner, Mubi Notebook, Reverse Shot, and Mizna. His performances have been featured on Button Poetry and Write About Now. 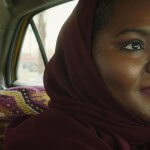