This year’s Arab Film Festival was record-breaking. Relive all the excitement through AFF2019 best moments. From sold out shows to filmmakers’ Q&A, let’s celebrate the best of Arab Cinema together.

Photos from Opening Night at the Castro Theatre

The first of AFF2019 best moments was this year’s Arab Film Festival’s Opening Night in San Francisco – we saw a historic turnout! The crowd at the iconic Castro Theatre came out in droves to experience Elia Sulieman’s It Must Be Heaven on the big screen – Palestine’s entry to the 2020 Academy Awards. The audience was even treated to a special pre-screening show by Aljuthoor Dabke Troupe! 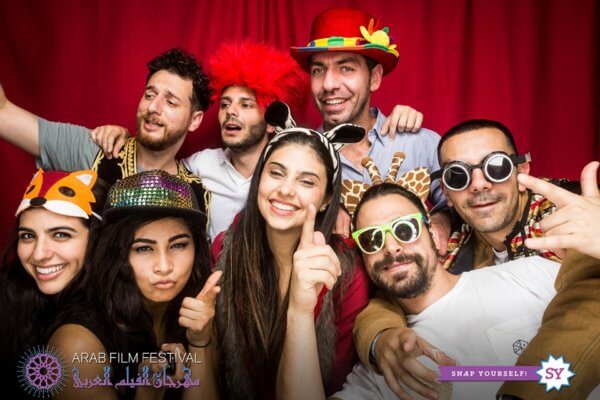 To top off the opening night festivities we hosted our annual afterparty at 251 Club. This year’s party may have been the most exciting one yet with a long line of folks clamoring to get in. It was an unforgettable night of music and dancing!

Film stills from aKasha, Flesh Out and Freedom Fields

Among AFF2019 best moments, we were so excited and proud to present films from three North African countries, never before featured in the festival. aKasha, the debut feature film from Sudanese director hajooj kuka, was shown at both The Roxie Theater and The New Parkway Theater. Flesh Out, the Mauritanian debut from filmmaker Michaela Occhipinit, screened at The Roxie Theater. And finally, Freedom Fields, the incredible soccer documentary from Libyan-English director Naziha Arebi delighted audiences at The New Parkway Theater. 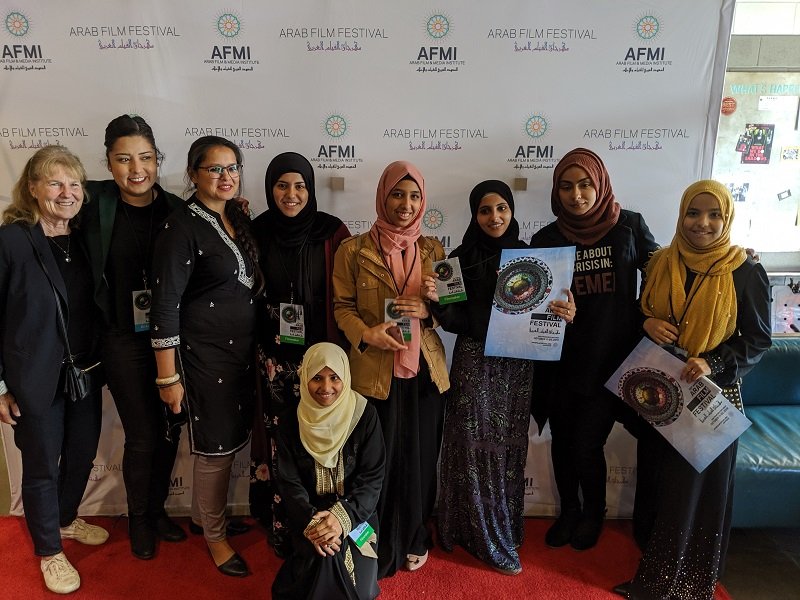 Prior to the screening of American Muslim, we had the pleasure of presenting the Takalam Year 2 final film. Takalam: Arab Youth Speaking Up is AFMI’s summer program for Arab-American youth that aims to uplift young voices, support the achievement and success of newcomer families and develop leadership in students. This year, they presented a film entitled Fireworks at Sea. This short film features Yemeni-American young women who share their collective story as refugees of war and interview women in their Oakland, California community about their struggles and strength. Our education director Lucie Kroening also moderated a Q&A with the young filmmakers about their work. 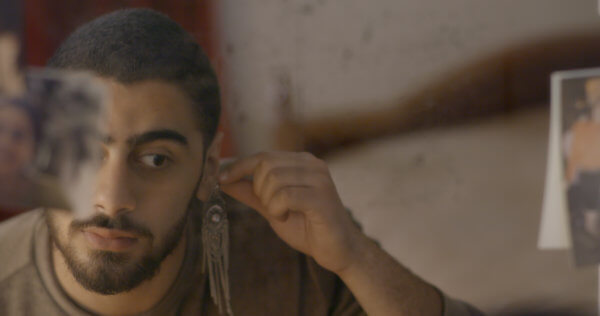 Film still from Son of a Dancer

5) Sold Out Show for our Inaugural Queer Lens – LBGT Showcase

We were so excited to present our inaugural LBGT short film showcase, Queer Lens, this year and it turns out we weren’t the only ones! The screening at the Roxie Theatre is definitely one of AFF2019 best moments and it completely sold out, making it possibly our most popular event, outside of opening night. This year’s selections included the films Brothers (dir. Mike Mosallam), Son of a Dancer (dir. Georges Hazim), Dearborn Ash (dir. Hena Ashraf), Marco (dir. Saleem Haddad) and Label Me (Dir Kai Kreuser). The screening featured a Q&A with director Hena Ashraf as well as Chris Campbell, the choreographer of Brothers. 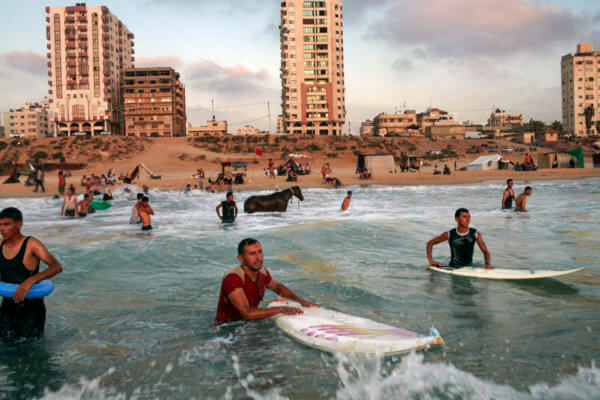 Audiences also really showed up for both screenings of Gaza, the incredible documentary about life in the Gaza Strip. This film, which is also Ireland’s submission to the 2020 Academy Awards, brought out two full houses at both The Roxie and The New Parkway. Prior to the screenings, a note was read from location manager Fady Hanona, who has been unable to leave Gaza to attend any of the screenings since the film’s premiere at Sundance earlier this year. 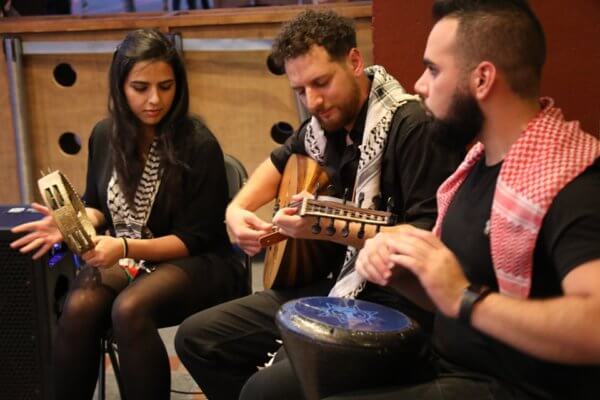 For this year’s staple Arab Classics screening, we had the pleasure of sharing the 1959 Egyptian film Encounter of the Unknown from renown director Atef Salem. Audiences were also treated to a beautiful and intimate performance by local oud master Hashem Abdel-Hadi. That could count as one of AFF2019 best moments on its own and was the perfect way to get into the mood for this noir-style murder mystery. 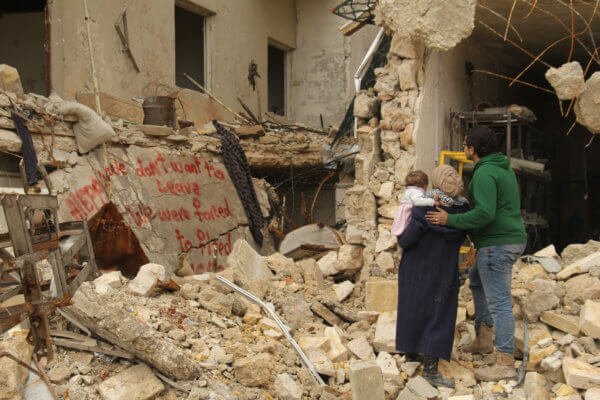 Film still from For Sama

8) Sold Out Screening of For Sama

Another exciting sold out screening was that of the documentary For Sama from filmmakers Waad al-Kateab and Edwards Watts. The event was a shockingly powerful, unforgettable experience. The film left most of the audience in tears. 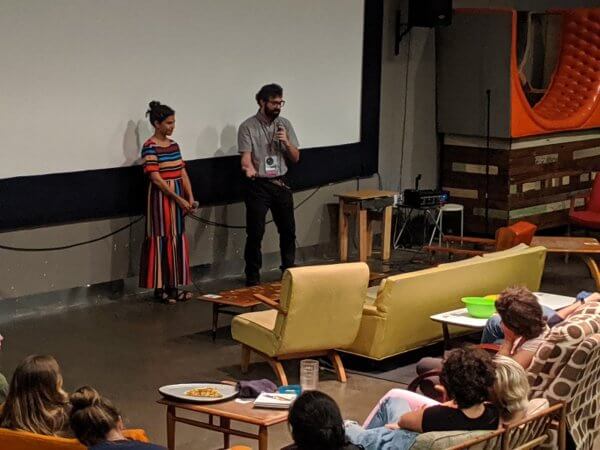 We had the pleasure of hosting many visiting filmmakers and ask them all of our burning questions, each of those coversations part of AFF2019 best moments. There was the Q&A at Queer Lens screening, mentioned earlier, as well as sessions with Cyril Aris (director of The Swing), Sara Maamouri (producer of We Are Not Princesses), Nadia Shihab (director of Jaddoland) and Chahine Fellahi (director of Chergui). All Q&A’s were moderated by our festival programmer Alex Farrow who described them as “super fun and productive”. It’s always amazing to have some of the actual filmmakers in attendance to get a deeper understanding of their films!

Film stills from selections from the 2019 Shorts Programs

With 5 shorts programs featuring 32 films, AFF 2019 saw the largest presence of short films at the festival to date! These programs were some of our most widely attended screenings. The programs included Queer Lens – our inaugural LBGT program, From the West Bank – a program featuring some of the strongest, soul-moving shorts from the West Bank, Documentary Nexus – a documentary spotlight highlighting films that show a nuanced insight into critical issues which are often overlooked by American mass media, Aswat Jadida (new voices) – our inaugural showcase of new voices working within the register of cinematic storytelling, and Ruya (visions) – a program featuring films from some of the most talented female filmmakers who are pushing the boundaries of storytelling. 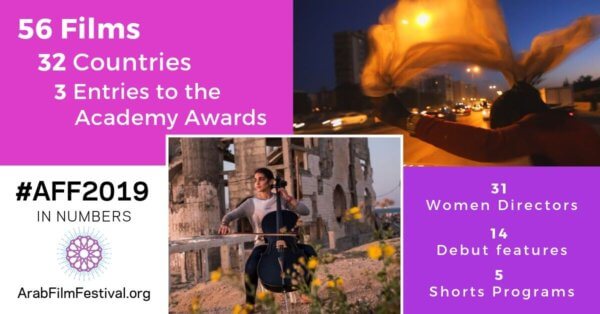 Already looking forward to AFF2020? Sign up for our newsletter here to be the first to know when dates are announced! 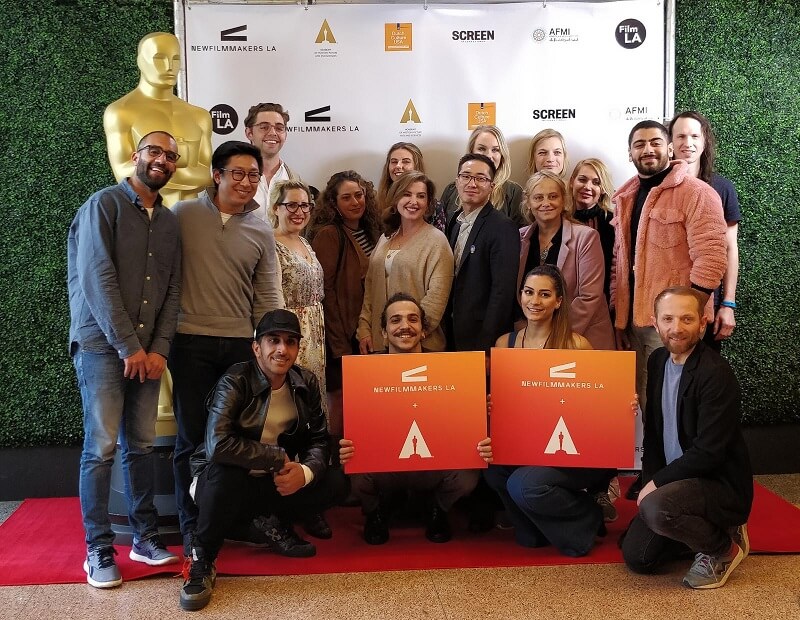 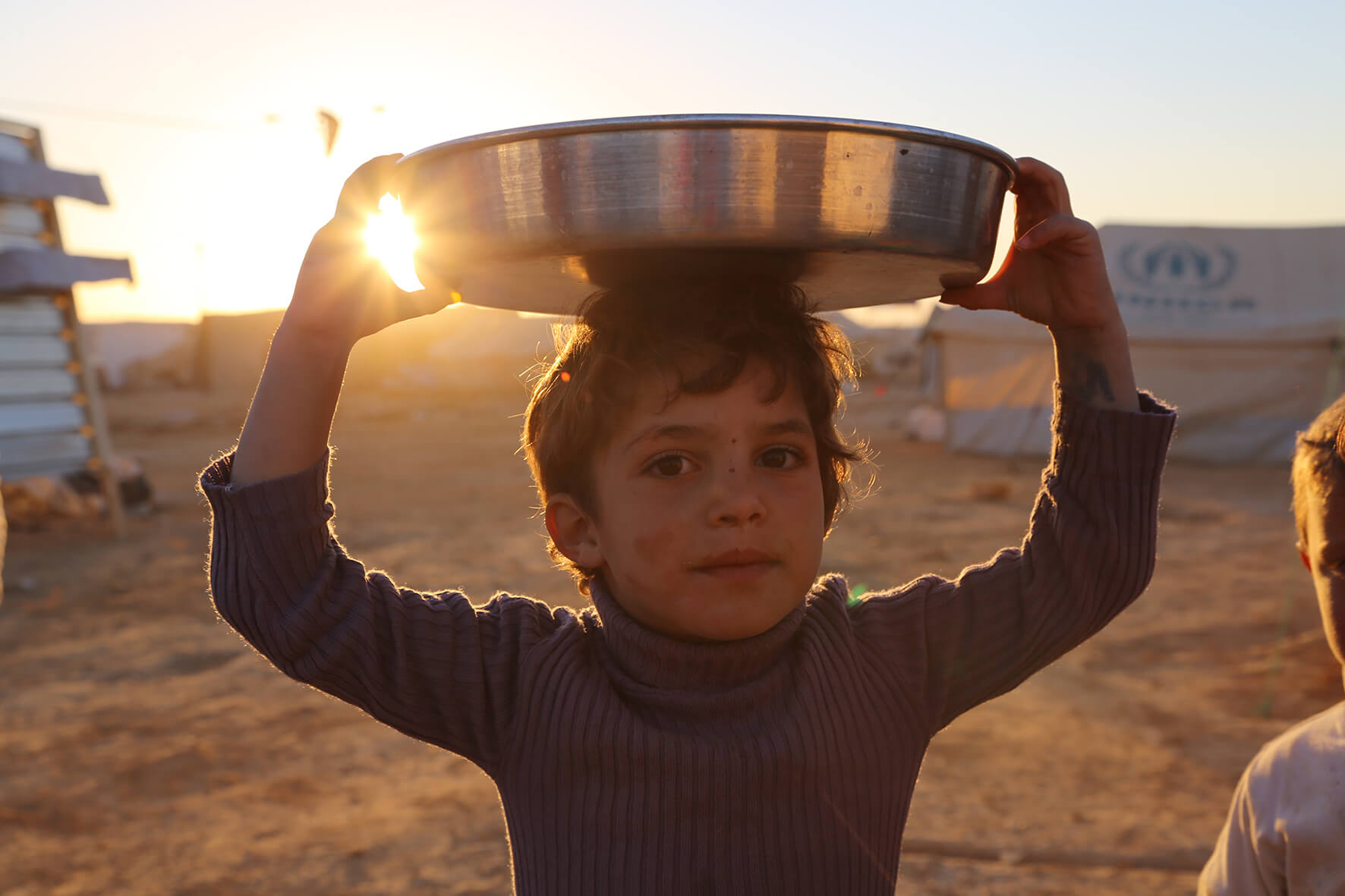 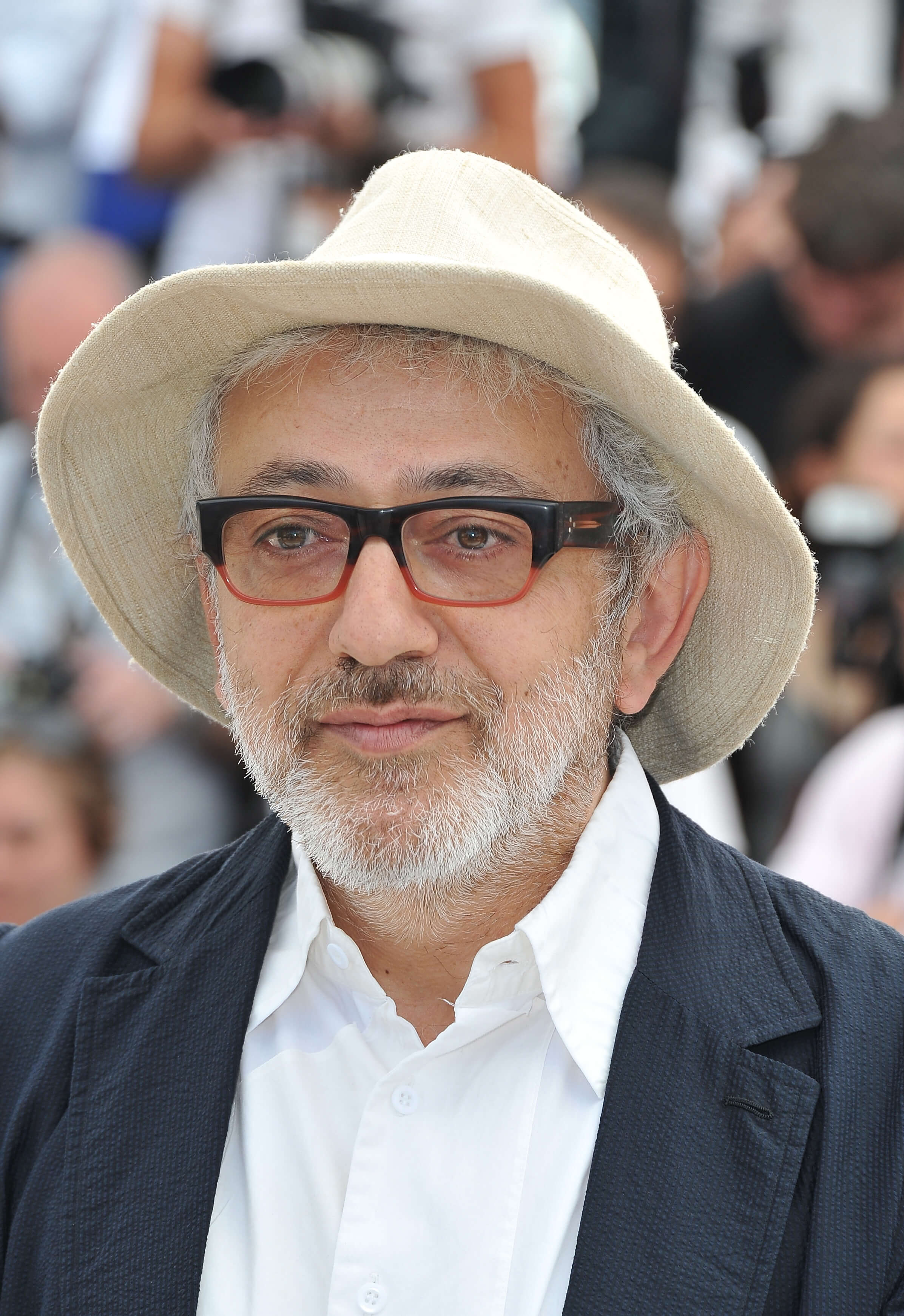