Interview with Abe Kasbo of A Thousand and One Journeys: The Arab Americans

Abe Kasbo is the director, writer and executive producer of the film A Thousand and One Journeys: The Arab Americans, a documentary that explores the little known history of Arabs in the United States over the past 200 years. The film examines Arabs’ unique immigrant experience and search for the American dream through the personal stories of influential members of the Arab-American community such as actor Jamie Farr, presidential candidate Ralph Nader, Pulitzer-prize winning journalist Anthony Shadid and comedian Maysoon Zayid, (just to name a few). Abe’s debut film has been heralded by audiences around the country who are excited to finally see this part of American history told. An Arab immigrant himself, Abe arrived in the U.S. from Aleppo, Syria in 1980. Besides being a filmmaker, he also boasts the titles of CEO of Verasoni Worldwide, an integrated marketing and public relations firm in New Jersey and founder of the production company Zeitoune FilmWorks. Abe graciously allowed us to pick his brain about A Thousand and One Journeys and his foray into the world of filmmaking. 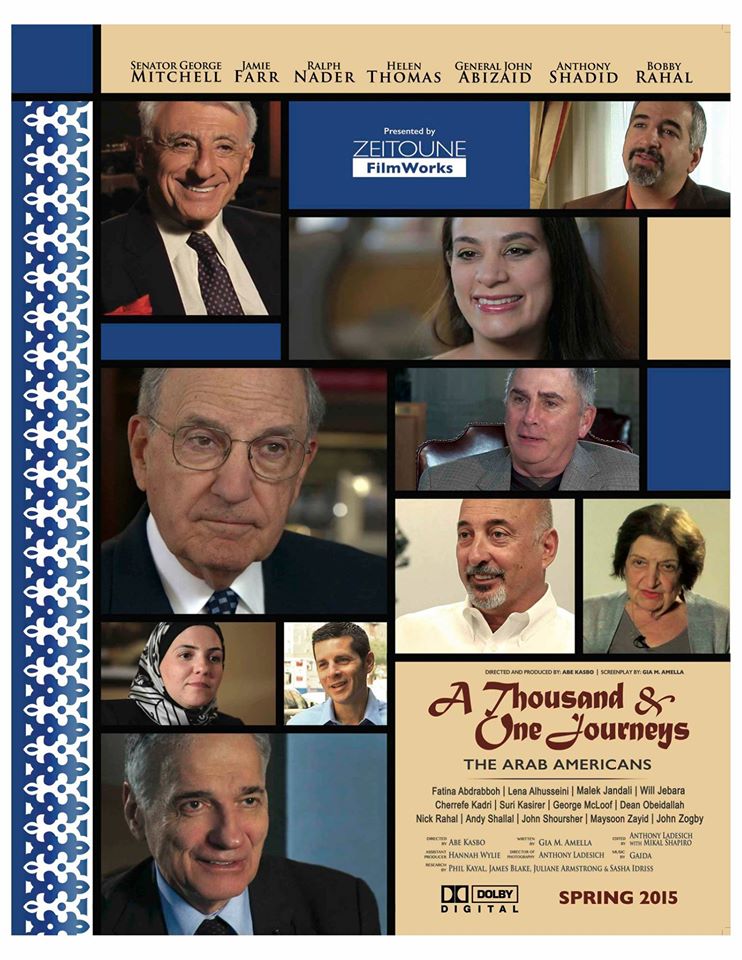 Arab Film Festival: Tell us about your film A Thousand and One Journeys: The Arab Americans. What is it about? What inspired you to make make this project?

Abe Kasbo: This film is about a silent chapter of American History, those who immigrated to America from the Middle East, North Africa and Arabian Peninsula and their impact and contributions.  Of course, stories of the Irish, Italian, Germans and other immigrant groups are ubiquitous and well-known in our society, yet the Arab American story and experience has been obscure for about 150 years, so I thought it was time to tell that story, especially since I immigrated here with my family in 1980.

I made this film because I felt that people’s perception, including the media’s, of Arab Americans was off base.  When I first came to the US, I sat in class with my friends and I told them I was from Syria and they asked if I could speak Italian. “Not Sicily, Syria,” I would respond.  And for the next 30 or so years, I found myself explaining Syria, the Middle East, Christianity and Islam to my friends who would simply blurt out what they saw on TV or heard on the radio as fact. So in 2007, I thought it was time to make this film.

AFF: A big part of your film is about busting myths and stereotypes. Is there anything that you discovered while making A Thousand and One Journeys: The Arab Americans, that surprised even you?

AK: It took about 8 years and 40 interviews to complete this film. During that journey and research, I was amazed at how deeply ingrained Arab Americans are into their communities. Everyone knows about the large Arab American population centers like Paterson, NJ, Dearborn, MI and Orange County, CA, but I was surprised to discover that Arab Americans communities have thrived and continue to be pillars in places like Cedar Rapids, Iowa, Oklahoma City, Oklahoma, Waterville, Maine, and even in Montana.

My biggest discovery while making the film – and it continues to this days – is when I talk to people all over the country, including Arab Americans, about the film and their response is “I didn’t know any of this,” or “why wasn’t this film done sooner.”  There’s a real appetite for this story, I sensed it but I didn’t know it until I saw the audience reaction. 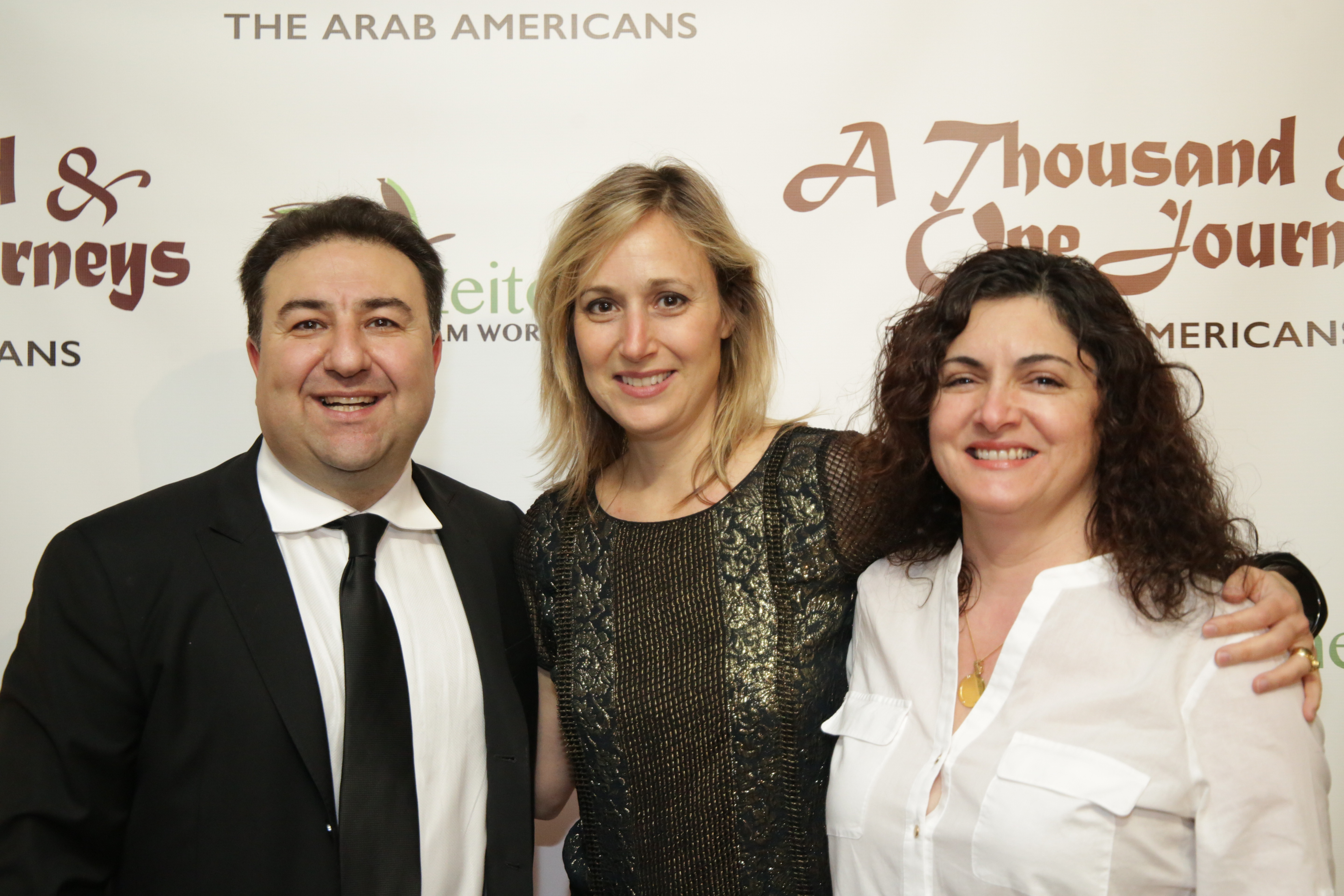 AFF: This is the first film you’ve made and your day job is CEO of Verasoni Worldwide, a marketing and PR firm. Why did you choose to express these ideas through film?

AK: It’s my first film, and likely won’t be the last. I wanted to share my own immigration experience through this film by telling a larger story, that in my opinion is an indispensable part of the collective American Story.  I grew up in Aleppo and I came here without speaking a word of English. For a ten-year-old at the time, in Aleppo, I was exposed to American culture and values because I grew up watching television shows like Little House on the Prairie, The Virginian, I read Batman and Superman…and all of this in Arabic. My friends and I played Cowboys and Indians on the streets of Aleppo. I liked Diana Ross and blue jeans…what we saw out of America, we loved.  Did we adopt these things because of the entertainment value? Absolutely. But also because we connected with the larger ideals of hard work, perseverance, fairness, which we saw from our American heroes on TV and in comic books. Then, we immigrated here, and what I was seeing in the media and from our larger society about Arab Americans from my pre-teen years to the time I decided to make the film (through today) was simply off base. There was a disconnect that I knew I wanted to fix.  I hope this film will help bridge that disconnect.

AFF: What was your learning experience like? Did you find it easy to jump into filmmaking?

AK: Making this documentary was an amazing learning experience, and there could not have been a larger divide between my perceptions and my experience in making this film. But what I instinctively knew early on was I needed to get interviews with well-known individuals because it was their voice and experience that would help carry the film. And since I had no track record, there was no reason for anyone to give me an interview.  I tried for a while to secure interviews with no success until I sent an email to the late Anthony Shadid through the New York Times’ website. Anthony was in Lebanon at the time. I sent that email around 11 PM EST and he responded within 15 minutes saying that he will be in Boston and he would love to do the interview.  After Anthony’s interview, it became easier to secure interviews with others because I would say “we just did an interview with Anthony Shadid…” and that opened the next few doors, and so on.

I learned on the job, I made lots of mistakes, but at a certain point in the project I surrounded myself with a more seasoned team. Gia Amella, who wrote the film, is an experienced award winning filmmaker. she helped me navigate some of the more challenging parts of the documentary, and I am proud to call her a friend. Along the way, I met filmmaker Anthony Ladesich from Kansas City, who was also very helpful.  I am forever thankful to Hannah Wylie and James Blake, along with Jules Armstrong who led our research and production efforts and really made this film their own. And certainly, we could not complete the project without the amazing support of the John Templeton Foundation, The Victor Machuga Foundation, Lloyd Baroody and Zeina Mehio, and the Muna and Basem Hishmeh Foundation.

Like any project or business, you need a good team around you, and I’m fortunate to have a pretty good team. 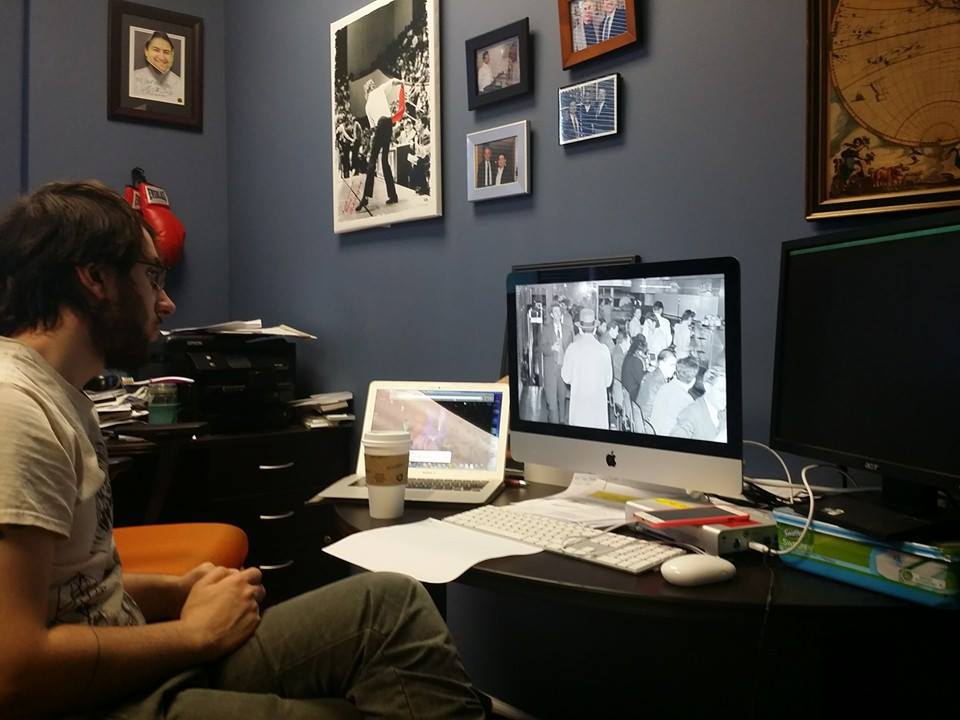 Editor Jakes Blake at work on the film

AFF: Did your experience in marketing help you get the film made? And how did you juggle both your career and your film project?

AK: It was a totally different ball game making this film for me. I didn’t juggle work and the film, I simply did both. If I had to stay up till 4 AM to work on a segment for the documentary, I did. If I traveled for the film, I was working on campaign ideas for my firm on planes or hotel lobbies.  If anything, the documentary injected more creativity into my work. We filmed in 11 states and did physical research in 4 states.  My kids were 3  years old when I started the project, I will say that without the unwavering support of my wife, I’m not sure how I could have done it.

AFF: What do you hope this film will accomplish? What are you hoping that people walk away with after watching it?

AK: I want this film to both help combat misperception about Arab Americans, and to be a tool for Arab Americans to understand their own history and take pride in it.  Arab Americans have played a meaningful role in helping to build the United States into the prosperous society it is, just like every ethnic community, it’s no different.  The community’s impact on and contributions to  American History in virtually every field, including science, medicine, politics, sports, business, entertainment, public service, military, education to name just a few are as deep as they are wide. Misperceptions are many, especially in the media, and I hope this film will allow Arab Americans to own their history and message.  It’s also a great way for fellow Americans to learn about our diverse community, its challenges and important accomplishments through the lens of American History.  I hope to see it in every library and school in the US, because I believe it helps tell a more complete story of America’s people.

It’s extremely important for the audience to understand that this film is not the definitive documentary on Arab Americans. Because of budget limitations and time, there were important elements that we simply could not include in this documentary. Having said that, I am proud of this film and its mission. We sold out screenings in eight cities around the country and the response has been overwhelmingly positive. 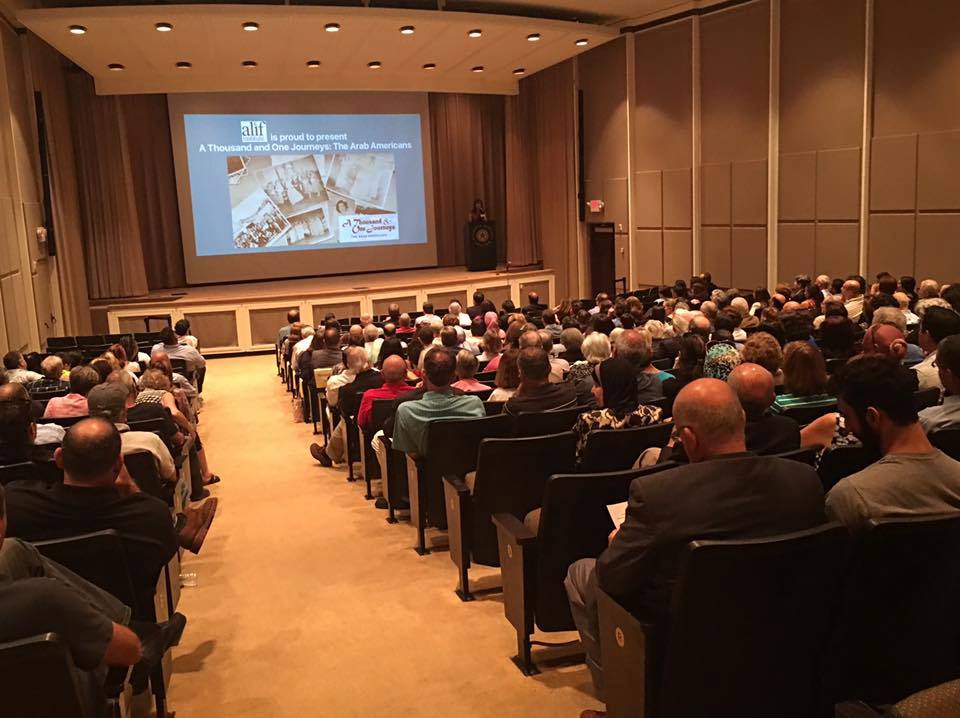 The audience at a screening of the film at Atlanta History

AFF: You are also the founder of Zeitoune Film Works, the production company for this film. Does Zeitoune have any more projects in the works?

AK: Yes, we have two more projects in the pipeline, but I regrettably I cannot discuss them at this time. My wife would kill me.

AFF: You moved here to America from Aleppo, Syria as a child. Do you have any advice for young Arab-Americans trying to navigate life here in the States?

AK: Be open to the great opportunities you’ll have here, and contribute what you can as often as you can to making your communities better.